Rejuvenated after a small break in the schedule, the Monster Energy Yamaha Factory MXGP trio started a rather busy three-week run of races in Sweden. The fifteenth event of the current season, run at the historic circuit of Uddevalla, was incredible for the 'blue' team. In fact, it may go down as the most memorable race of the year. 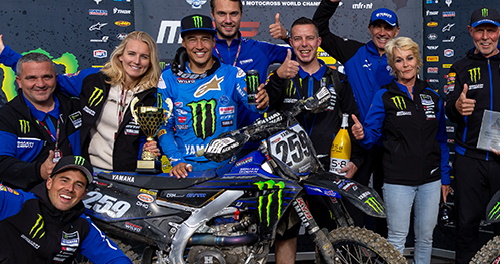 Proving just how good the YZ450FM is, the Monster Energy Yamaha Factory Racing riders occupied the top three spots on lap one of moto one. Maxime Renaux led, with Jeremy Seewer and Glenn Coldenhoff in tow. It was that order that they eventually finished in; one second separated Renaux and Seewer when the finish was reached. Such an incredible first moto obviously set the trio up for more success in the final moto.

It was Seewer who rose to the occasion in that second stint, as he took the holeshot aboard his 'blue' steed and simply did not look back from that point on. '91' led every single lap of that second moto to clinch yet another Grand Prix victory, something that he's becoming very familiar with, and tighten his grip on second in the championship standings. 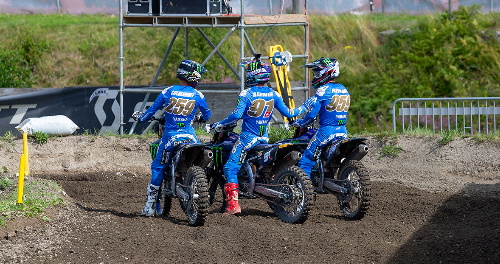 Glenn Coldenhoff was never too far behind his teammate in the second moto – he lurked inside of the top five and made a push for fourth in the latter stages. Although he could not advance higher than fifth in the end, that was more than enough to put '259' on the overall podium for the second week in succession. The third step of the podium was where he stood.

Unfortunately the victor of the first moto, Maxime Renaux, crashed out of the final moto on the first lap and was unable to continue. Despite that crash, he was still classified in eighth overall at the Grand Prix of Sweden. Renaux will be back on track at the next round of competition.

The Monster Energy Yamaha Factory MXGP truck will remain in Northern Europe now, as the Grand Prix of Finland is next on the agenda. Hyvinkää will host a stop of the FIM Motocross World Championship for the first time since 2014. 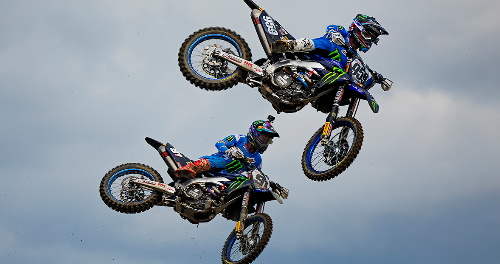 Jeremy Seewer: "I had two good starts today, and that is really important. Taking a holeshot in the second race makes it easier, especially on this track, because passing is super difficult. I won the GP, so it was an amazing weekend. There are three rounds to go now, so I just want to keep going and collect as many first-place trophies as possible."

Glenn Coldenhoff: "We made some changes today and it definitely worked out, so I am just grateful to the team. We had a dream finish for Yamaha with the three of us going first, second and third... Although I wish the order that we finished was different. Still, it says something. I am happy to be here on the podium again. It's always good to be here."

Maxime Renaux: "It's really frustrating. I had the perfect start to the day with a top start and a race win after leading the whole race, but I came together with another rider and crashed in the second moto. Some riders rode over me, so I was a little bit bruised. I tried to continue, but I could not hold the handlebars and I had to stop. It's disappointing, but luckily no injuries and I will be ready to return in Finland."