The first race of 2022 will be held this weekend on the sandy track of Alghero, in the splendid location of the Sardinian west coast. Embraced by the beaches of “le Bombarde”, the Lazzaretto circuit is ready to open for the second time after 2016, the racing season of the International Motocross. After just two months from the last Grand Prix of the exciting 2021 championship, we are back to racing in order to get ready for the new challenge and the Internazionali d’Italia are, once again, the testing ground chosen by the best teams in the world to check the level of preparation of their riders and bikes. 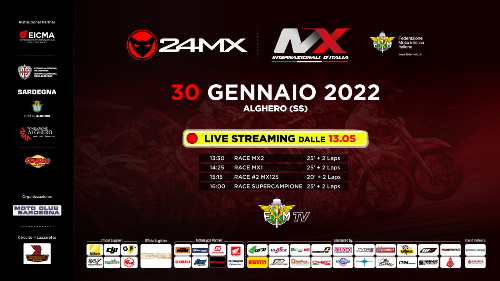 More than 100 riders entered in the race between 125, MX2 and MX1 classes with some of the most prestigious names on the international scene. In MX1 the two HRC team riders, Tim Gajser and Mitch Evans, will be the top representatives of the Honda patrol alongside with the European Champion of the EMXOpen class Davide de Bortoli, with Ruben Fernandez (Team 114) and with the Dutch Davy Pootjes competing with motocross legendary Jaky Martens’ team bike. All three riders of the Yamaha Factory MXGP team will be present with Glenn Coldenhoff, Jeremy Seewer and the reigning MX2 World Champion, Maxime Renaux making his debut on the 450. The Spaniard Jorge Prado will bring the GasGas 450 in the 2023 configuration to his debut in the race. while Alberto Forato will continue his way in MX1 with the bike managed by the SM Action Yuasa Battery team. The Beta Motors of Jeremy Van Horebeek and Alessandro Lupino will competing, making his debut on the Italian bike. The Kawasaki Factory Racing Team will also be present with Ben Watson at the first race in green, while the Australian Jed Beaton will make his debut on the 450 managed by the F&H Team. Christophe Charlier will just need to cross the sea from Corsica to be on track with the Fantic 450 and we still wait to know if Nicholas Lapucci will have recovered from the injury he suffered in training.

In MX2 great expectation to see the Red Bull GasGas factory duo with Mattia Guadagnini and Simon Lagenfelder at work, as for the German it will be the first race with the team managed by De Carli, while Andrea Adamo after a year of apprenticeship with the SM Action Yuasa Battery team bike, will test his winter preparation on the 250 GasGas. MX2 vice world champion, Jago Geerts, will be on the track with the factory Yamaha and Kevin Horgmo, who switched to Kawasaki F&H, will also be at the start. Eyes also on 125 European Champion Valerio Lata, on the KTM 250 of the MRT team, in preparation for the move to the EMX250, as well as his rival, the Norwegian Hakon Osterhagen, competing with the Fantic 250 of Team Maddii, as his team mate Cornelius Toendel. The German Max Spies, European Champion of the EMX2t Class will be there for the first time racing on the KTM as Hakon Fredriksen will do the same on the Honda 250. 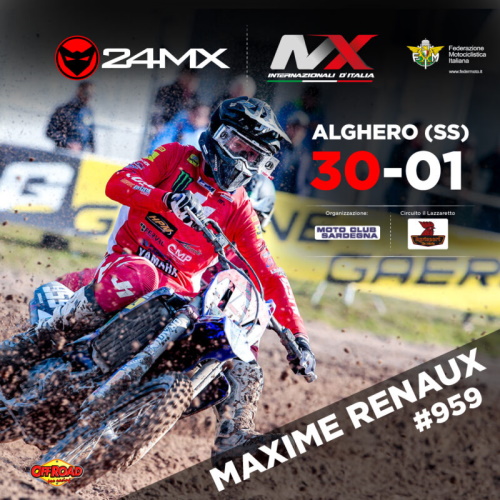 The group of foreign riders in 125 is always very large, led by the Fantic duo of the Maddii team, Alexis Fueri and Cas Valk who will compete with the Italian riders led by Ferruccio Zanchi and Nicola Salvini on the small Yamaha bikes. Alghero will see also the debut of Sebastian Leok, son of world motocross veteran Tannel Leok and the latest in a long family tradition.

Due to the Covid19 pandemic, the race will be held without public on site but it will be possible to follow all the action from the Lazzaretto track of Alghero in live streaming, starting from:  01.05 P.M. connecting to: Federmoto.TV platform.

Click here to view the “how to buy” tutorial.

#staytuned… the countdown his started!