Scott Smulders of the Husqvarna SKS Racing NL team remains inside of the top five in the Dutch Masters of Motocross 250. Smulders scored important points during the second round of the championship and finished in twelfth position overall.

The time practice went well for Scott. He managed to improve on his fastest lap time a few times and ended the session in fifteenth position. He knew that it could be a little better so he was motivated to show this in the first moto.

In the first moto he took a good start but in the first corner he was forced to go wide and came out of the corner in fifteenth position. During the race he had a few nice battles and finished the race in twelfth position. ‘’I was not completely satisfied because I struggled to find my rhythm in the beginning of the race. In the second part of the moto I was riding top five lap times, which was good,’’ said Scott.

In the second moto he started the race again around fifteenth position and again he was a little bit too careful in the beginning. During the race he worked himself up into tenth position but due to a collision with a back marker in the final lap, he lost a spot and finally finished the race in eleventh position. ‘’I’m pretty satisfied over my riding but in both motos I was too careful in the beginning. I knew better results were possible today but it was a good learning day and we keep working hard to be better in the next race.’’ 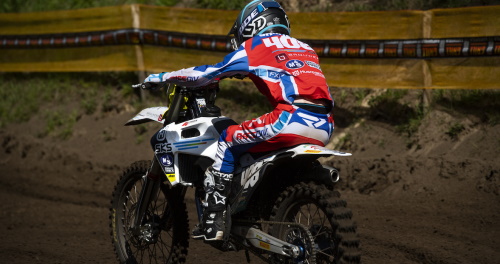 Scott finished in twelfth position overall and sits in fifth position in the championship standings. On the 1st of May the series continues in Harfsen.