Gyan Doensen of the Husqvarna SKS Racing NL team has won both motos of the ADAC 85 Cup race in Gaildorf last weekend. His team mate Scott Smulders participated in the Youngster 250 class and managed to score points.

Gyan wasn’t completely happy with his lap time in time practice because he was searching for space to ride a perfect lap. He didn’t find it and finally had to be satisfied with third position. 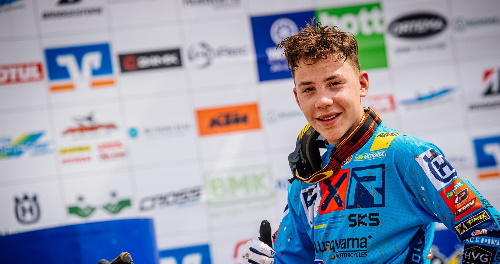 In the opening moto he didn’t took a good start but in the second corner he already made up a lot of time and worked his way up to seventh by the time he went over the finish line at the end of the first lap. In the following laps he worked his way up into the lead and controlled the race from then on.

Gyan took a better start in the second moto and took over the lead immediately. With a consistent pace he made a gap over himself and the second place rider and dominated the moto.

With a double moto win he took the overall win as well and this gives him a lot of confidence for the coming races. 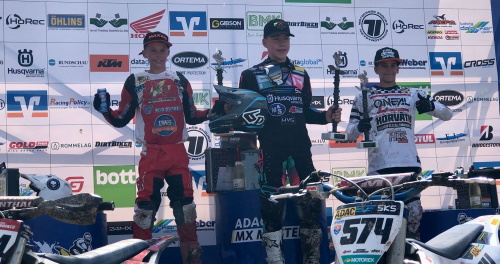 Scott Smulders was riding in the Youngster 250 Cup. He set the eighth fastest time in qualifying but wasn’t completely happy about this because he didn’t found the space to ride a perfect lap. The first moto started with a setback because Scott crashed in the opening lap and got stuck under his bike. He lost a lot of time here and wasn’t able to make it back inside of the points.

In the second moto he worked his way from around 25th position back up to eighteenth place and the third and final moto he started around twentieth place and fought his way back up to a group till tenth place. Scott gave everything he had and finally finished the race in thirteenth spot.

Scott made progression over the weekend but isn’t completely satisfied over his performances in the last few weeks. He will keep working hard to be better in the next few races!